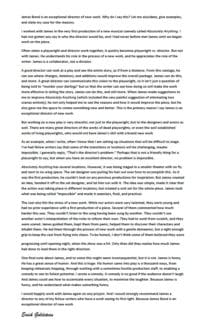 James Bond is an exceptional director of new work. Why do I say this? Let me elucidate, give examples, and state my case for the reasons.

I worked with James in the very first production of a new musical comedy called Absolutely Anything. I had not gotten any say in who the director would be, and I had never before met James until we began work on the piece.

Often when a playwright and director work together, it quickly becomes playwright vs. director. But not with James. He understands his role in the process of a new work, and he appreciates the role of the writer. James is a collaborator, not a dictator.

A good director can look at a play and see the entire story, as if from a distance. From this vantage, he can see where changes, deletions, and additions would improve the overall package. James can do this, and more. A great director can communicate this vision to the playwright, so it isn’t just a question of being told to “murder your darlings” but so that the writer can see how doing so will make the work more effective in telling the story. James can do this, and still more. When James made suggestions to me to improve Absolutely Anything (which included the very painful suggestion of eliminating two scenes entirely), he not only helped me to see the reasons and how it would improve the piece, but he also gave me the space to create something new and better. This is the primary reason I say James is an exceptional director of new work.

But working on a new play is very stressful, not just to the playwright, but to the designers and actors as well. There are many great directors of the works of dead playwrights, or even the well established works of living playwrights, who would not have James’s skill with a brand new work.

As an example, when I write, often I know that I am setting up situations that will be difficult to stage. I’ve had fellow writers say that some of the transitions or locations will be challenging, maybe impossible. I generally reply, “That’s the director’s problem.” Perhaps that is not a friendly thing for a playwright to say, but when you have an excellent director, no problem is impossible.

Absolutely Anything has several locations. However, it was being staged in a smaller theater with no fly and next to no wing space. The set designer was pulling his hair out over how to accomplish this. As it was the first production, he couldn’t look on any previous productions for inspiration. But James created an idea, handed it off to the set designer, and let him run with it. The idea was simple, made it clear that the action was taking place in different locations, but created a unit set for the whole piece. James took what was being called “impossible” and made it seamless, fluid, and practical.

The cast also felt the stress of a new work. While our actors were very talented, they were young and had no prior experience with a first production of a piece. Several of them commented how much harder this was. They couldn’t listen to the song having been sung by another. They couldn’t use another actor’s interpretation of the roles to inform their own. They had to work from scratch, and they were scared. James guided them, kept them from panic, helped them to discover their characters and inhabit them. He led them through the process of new work with a gentle demeanor, but a tight enough grip to keep the cast from flying into chaos. To be honest, I don’t think some of them believed they were progressing until opening night, when the show was a hit. Only then did they realize how much James had done to lead them in the right direction.

One final note about James, and to some this might seem inconsequential, but it is not. James is funny. He has a great sense of humor. And this is huge. His humor came into play is a thousand ways, from keeping rehearsals hopping, through working with a sometimes hostile production staff, to enabling a comedy to see its fullest potential. I wrote a comedy. A comedy is no good if the audience doesn’t laugh. And James could see how to accentuate every situation, to maximize the laughter. Because James is funny, and he understand what makes something funny.

I would happily work with James again on any project. And I would strongly recommend James a director to any of my fellow writers who have a work seeing its first light. Because James Bond is an exceptional director of new work.