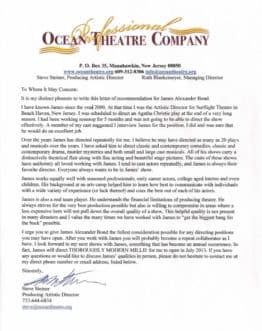 It is my distinct pleasure to write this letter of recommendation for James Alexander Bond. I have known James since the year 2000. At that time I was the Artistic Director for Surflight Theatre in Beach Haven, New Jersey. I was scheduled to direct an Agatha Christie play at the end of a very long season. I had been working nonstop for 5 months and was not going to be able to direct the show effectively. A member of my cast suggested I interview James for the position. I did and was sure that he would do an excellent job.

Over the years James has directed repeatedly for me. I believe he may have directed as many as 20 plays and musicals over the years. I have asked him to direct classic and contemporary comedies, classic and contemporary drama, murder mysteries and both small and large cast musicals. All of his shows carry a distinctively theatrical flair along with fme acting and beautiful stage pictures. The casts of these shows have uniformly all loved working with James. I tend to cast actors repeatedly, and James is always their favorite director. Everyone always wants to be in James’ show.

James works equally well with seasoned professionals, early career actors, college aged interns and even children. His background at an arts camp helped him to learn how best to communicate with individuals with a wide variety of experience (or lack thereof) and coax the best out of each of his actors. James is also a real team player. He understands the financial limitations of producing theatre. He always strives for the very best production possible but also is willing to compromise in areas where a less expensive item will not pull down the overall quality of a show. This helpful quality is not present in many directors and I value the many times we have worked with James to “get the biggest bang for he buck” possible.

I urge you to give James Alexander Bond the fullest consideration possible for any directing positions you may have open. After you work with James you will probably become a repeat collaborator as I have. I look forward to my next shows with James, something that has become an annual occurrence. In fact, James will direct THOROUGHLY MODERN MILLIE for me to open in July 2013. If you have any questions or would like to discuss James’ qualities in person, please do not hesitate to contact me at my direct phone number or email address, listed below.