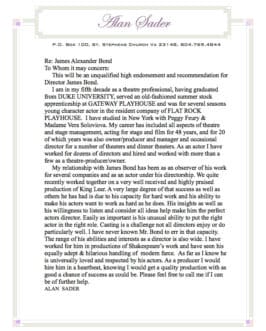 To Whom it may concern:

This will be an unqualified high endorsement and recommendation for Director James Bond.

I am in my fifth decade as a theatre professional, having graduated from DUKE UNIVERSITY, served an old-fashioned summer stock apprenticeship at GATEWAY PLAYHOUSE and was for several seasons young character actor in the resident company of FLAT ROCK PLAYHOUSE.  I have studied in New York with Peggy Feury & Madame Vera Soloviova. My career has included all aspects of theatre and stage management, acting for stage and film for 48 years, and for 20 of which years was also owner/producer and manager and occasional director for a number of theaters and dinner theaters. As an actor I have worked for dozens of directors and hired and worked with more than a few as a theatre-producer/owner.

My relationship with James Bond has been as an observer of his work for several companies and as an actor under his directorship. We quite recently worked together on a very well received and highly praised production of King Lear. A very large degree of that success as well as others he has had is due to his capacity for hard work and his ability to make his actors want to work as hard as he does. His insights as well as his willingness to listen and consider all ideas help make him the perfect actors director. Easily as important is his unusual ability to put the right actor in the right role. Casting is a challenge not all directors enjoy or do particularly well. I have never known Mr. Bond to err in that capacity.  The range of his abilities and interests as a director is also wide. I have worked for him in productions of Shakespeare’s work and have seen his equally adept & hilarious handling of  modern farce.  As far as I know he is universally loved and respected by his actors. As a producer I would hire him in a heartbeat, knowing I would get a quality production with as good a chance of success as could be. Please feel free to call me if I can be of further help.