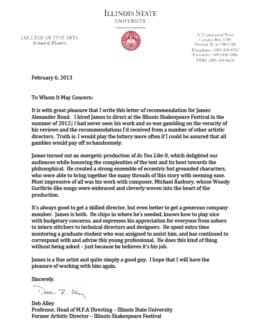 It is with great pleasure that I write this letter of recommendation for James Alexander Bond. I hired James to direct at the Illinois Shakespeare Festival in the summer of 2012. I had never seen his work and so was gambling on the veracity of his reviews and the recommendations I’d received from a number of other artistic directors. Truth is, I would play the lottery more often if I could be assured that all gambles would pay off so handsomely.

James turned out an energetic production of As You Like It, which delighted our audiences while honoring the complexities of the text and its bent towards the philosophical. He created a strong ensemble of eccentric but grounded characters, who were able to bring together the many threads of this story with seeming ease. Most impressive of all was his work with composer, Michael Rasbury, whose Woody Gurthrie‐like songs were embraced and cleverly woven into the heart of the production.

It’s always good to get a skilled director, but even better to get a generous company member. James is both. He chips in where he’s needed, knows how to play nice with budgetary concerns, and expresses his appreciation for everyone from ushers to intern stitchers to technical directors and designers. He spent extra time mentoring a graduate student who was assigned to assist him, and has continued to correspond with and advise this young professional. He does this kind of thing without being asked – just because he believes it’s his job.

James is a fine artist and quite simply a good guy. I hope that I will have the

pleasure of working with him again.