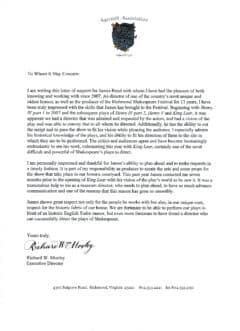 I am writing this letter of support for James Bond with whom I have had the pleasure of both knowing and working with since 2007. As director of one of the country’s most unique and oldest homes, as well as the producer of the Richmond Shakespeare Festival for 13 years, I have been truly impressed with the skills that James has brought to the Festival. Beginning with Henry IV part 1 in 2007 and the subsequent plays of Henry IV part 2, Henry V and King Lear, it was apparent we had a director that was admired and respected by the actors, and had a vision of the play and was able to convey that to all whom he directed. Additionally, he has the ability to cut the script and to pace the show to fit his vision while pleasing the audience. I especially admire his historical knowledge of the plays, and his ability to fit his direction of them to the site in which they are to be performed. The critics and audiences agree and have become increasingly enthusiastic to see his work, culminating this year with King Lear, certainly one of the most difficult and powerful of Shakespeare’s plays to direct.

I am personally impressed and thankful for James’s ability to plan ahead and to make requests in a timely fashion. It is part of my responsibility as producer to create the sets and some props for the show that take place in our historic courtyard. This past year James contacted me seven months prior to the opening of King Lear with his vision of the play’s world as he saw it. It was a tremendous help to me as a museum director, who needs to plan ahead, to have so much advance communication and one of the reasons that this season has gone so smoothly.

James shows great respect not only for the people he works with but also, in our unique case, respect for the historic fabric of our house. We are fortunate to be able to perform our plays in front of an historic English Tudor manor, but even more fortunate to have found a director who can successfully direct the plays of Shakespeare.